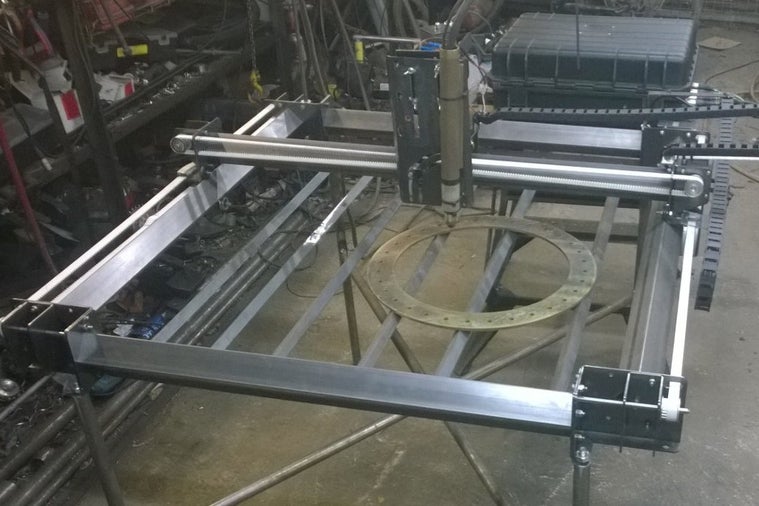 So, you've bought a plasma cutter and you wish you could accurately cut your designs in metal. Tracing lines by hand gives disappointing results and CNC Plasma tables are way out of your budget. Sound familiar? Well, that's what I thought anyway!

If you have not bought your plasma cutter yet - there are a few things to bear in mind!

This plasma table has been designed to work with whatever plasma torch you have whether hand-held or a full blown CNC Torch. The mounting plate has been designed to be adaptable as possible. You can either attach the torch with zip-ties or U Bolts depending on how often you need to take it off.

This instructable really started on a Land Rover forum, LR4x4.com One of the members (RobertSpark) was building his own plasma table but it was a bit complex and needed welding together. I thought "I'd like a plasma table" and thought I could build one too! I decided to design a table from scratch on Solidworks using Laser Cut parts which anybody could bolt together with no welding. It would also be scalable so you can build a table pretty much any size you like using the same laser cut parts. You need to source lengths of steel box section from a Steel Stockholder and everything else you can buy on eBay / Ali-Express.

All the parts need to be cut in 3mm or 1/8" mild steel A366/1008 Grade (or 304 Grade Stainless). The parts are suitable for both metric and imperial box section / nuts & bolts if you just pick the closest size.

William Piotrowski has sent me a link to a (very cool!) time-lapse of his build - which shows in intimate detail the build process as it has progressed so far. I thought it might help everyone else!